Buy the scripts for our plays, and other theatrical books, at Amazon.com. Use the links to license any of the plays we represent. Or buy one of the books, videos, or audio products featuring our actors.

This is the abridgement we used in our 2015 Dublin production of William Shakespeare’s classic tragedy. A running time of about 2:25 makes this an ideal version for schools and community theaters. Much of the fat, and the really boring characters, have been cut, leading to a more dynamic, fast-moving production. Suggested retail price: $8.95; no performance license required.

Bob and Susan Anderson are both college professors, and on this afternoon the family has gathered to help them celebrate 40 years of marriage. It’s not always harmonious. Bob is very nearly a “professional” atheist, his eldest son, Jim, is a televangelist, and second son George picks this day to come out as gay and introduce his fiance to the family. Bob spends much of the afternoon trying to get drunk and arguing with Jim. Just to keep things interesting, Bob’s secretary turns up and announces she’s pregnant with his baby. Suggested retail price: $12.95; license starting at $50.00/performance.

Clicking on a play’s link should open your email client and display an email. Please complete all of the fields and then click “send.” If you wish to license multiple plays from the collection The Sixth Victim & Other Plays, choose the link for one of the plays you’re requesting, then list the other(s) in the “Other Plays” field. If you are presented with a “do you want to change apps” popup, click “yes.” Hamlet doesn’t require a license, but photocopying is forbidden, so please purchase a sufficient number of copies for your cast and crew.

The Sixth Victim: It is 1888, and Jack the Ripper has already killed his five known victims. A beautiful young prostitute, Dina, brings a man back to her lodgings. Is he the Ripper? Or is the beautiful young redhead a far more dangerous predator? 1M, 1F, Victorian setting/costumes.

To Kill a King: A one act blank verse play that tells of the events leading up to William Shakespeare’s Hamlet. Possibly the Ghost was lying about a few things. Possibly King Hamlet didn’t particularly love his wife. Possibly Claudius wasn’t quite the villain he’s made out to be. Possibly, through the machinations of a vengeful ghost, it would turn out to be Hamlet, not Claudius, who killed Hamlet’s father. 9-14M, 2F, mid-11th century setting.

Burying Dad: Joe is a retired general, his sister Mary is a school teacher. The two are waiting for their father’s friends to come to his funeral. They’re going to have a long wait, during which they’ll find out quite a bit about their father, and themselves. 1M, 1F, contemporary.

It’s the Computer’s Fault: Monologue play. Rod is a compulsive computer geek with homicidal tendencies. When an online personality test says that he’s most like serial killer/cannibal Ed Gein, he kidnaps a young waitress and resolves to kill her and eat her. But first he’s going to explain just why. 1M, 1F (non-speaking), contemporary.

Sunday Afternoon: Dave and Norma have been married for 45 years. Now Dave is beginning to forget things, and Norma is wondering how she’s going to take care of him. On this Sunday afternoon he’s just back from the store, having bought the wrong things, and taking three hours to complete a 20-minute errand. Their daughter, Judy, arrives just as things are coming to a head. 1M, 2F, contemporary.

J.T. McDaniel, who played Claudius in our Hamlet, recorded this collection of several characters’ speeches from that play. 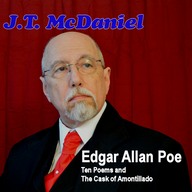 This album includes ten of Edgar Allan Poe’s most popular poems, as well as a complete recording of The Cask of Amontillado.

A good, basic introduction to performing Shakespeare. The audiobook version is read by the author, and includes an extra chapter of Shakespearean speeches and soliloquies not included (for what should be obvious reasons) in the print edition.

A great little book for anyone thinking of getting involved in community theatre. Available in trade paperback and Kindle editions. Audiobook coming soon.