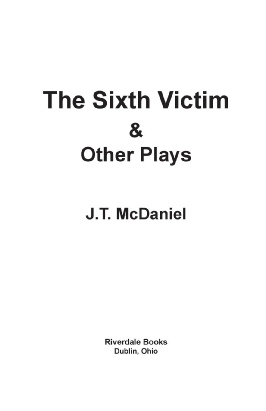 While we’re not staging any of these (at least, not yet), we are publishing an audiobook version of the collection. This is a fully produced version, with a cast of actors playing the individual parts. In other words, listening to the audiobook will be just about as close to attending an actual performance as you can get without going to the theater. Included in the audiobook are:

The Sixth Victim: Stars Mic O’Halloran and Ashton Brammer. Set in London’s Whitechapel slums in 1888. The Man may be Jack the Ripper, Dina may be his sixth victim. Or, perhaps, something is different this time.

To Kill a King: Stars J.T. McDaniel as King Hamlet and Claudius; Judy Parker as Gertrude; Jack Schultz as Hamlet, Osric, and Laertes; LeVanu Wu as Ophelia; Mic O’Halloran as the Ambassador, the Priest, and the Assassin; Justin Eberhard as Polonius; and Colton Weiss as Horatio, the Chief Counselor, and the First Guard. The play is a blank verse prequel to Shakespeare’s Hamlet, presenting one possible reason why things got to where they were when that play begins.

Burying Dad: Stars J.T. McDaniel as Joe and Ashton Brammer as Mary. A retired Army general and his sister are at the funeral home, waiting for people to show up for their father’s funeral. No one ever does, but we learn quite a lot about the two siblings and even more about their father.

It’s the Computer’s Fault: Stars Jack Schultz as Rod. A monologue play, wherein Rod tries to explain to the waitress he has tied and gagged in his cellar just why the outcome of an online personality quiz is forcing him to kill and eat her. Rod is just a bit obsessive.

Sunday Afternoon: Stars Judy Parker as Norma, J.T. McDaniel as Dave, and Ann O’Halloran as Judy. On a wintry Sunday after in central Ohio, Dave and Mary are expecting their daughter to visit. Dave has just returned from the store with the wrong things. Norma is worrying about her husband’s memory. A serious play, but at the same time filled with humorous moments.

Buy the Audiobook from:

Performance rights are available for all of the plays in this collection. See our Bookstore page for application.