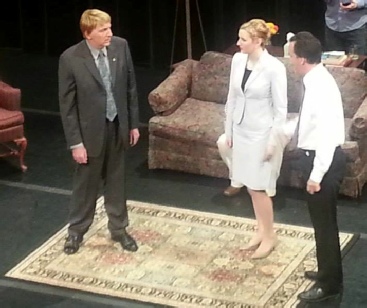 This world premier was our first production, presented for a limited run at the Abbey Theater of Dublin, from October 4 through October 19, 2013. Written by J.T. McDaniel, and directed by Colleen Dunne, Coming Out is a dark comedy that tells the tale of a family that takes the term “dysfunctional” to new heights.

The parents are both college professors, an Oxford educated philosophy professor father, and an Ohio State educated English Literature professor mother. They are celebrating 40 years of marriage, and very likely about 35 years of mutual infidelity. The father is a “professional” atheist (the sort who writes books about the subject), while the mother is sort of hoping for heaven and possibly a young Warren Beatty in the afterlife.

They have three grown children. The eldest is a fundamentalist evangelical minister and televangelist, who seems to fall somewhere between Pat Robertson and Fred Phelps in his philosophy and attitudes. The middle child, a daughter, is pragmatic, an elementary school teacher, and married to an OB/GYN. The youngest, another son, is a CPA who picks this day to announce his engagement to a lawyer, which would be fine with everyone if the lawyer wasn’t another man, which means it’s fine with everyone except the elder brother, who goes completely nuts.

Just to insure there will be no domestic tranquility, the father’s secretary also turns up to tell him she’s pregnant with his baby. One of the actors described the play as, “Outrageously funny; and it has something to offend everyone.”

Coming Out is licensed by Riverdale Literary Holdings, Inc., and is available for production by schools, community, regional, and other theaters. The script has been published in two editions, a “reading” edition that includes considerable additional material and notes, and a larger “acting” edition that includes only the script and is printed single sided using standard Dramatist’s Guild format.